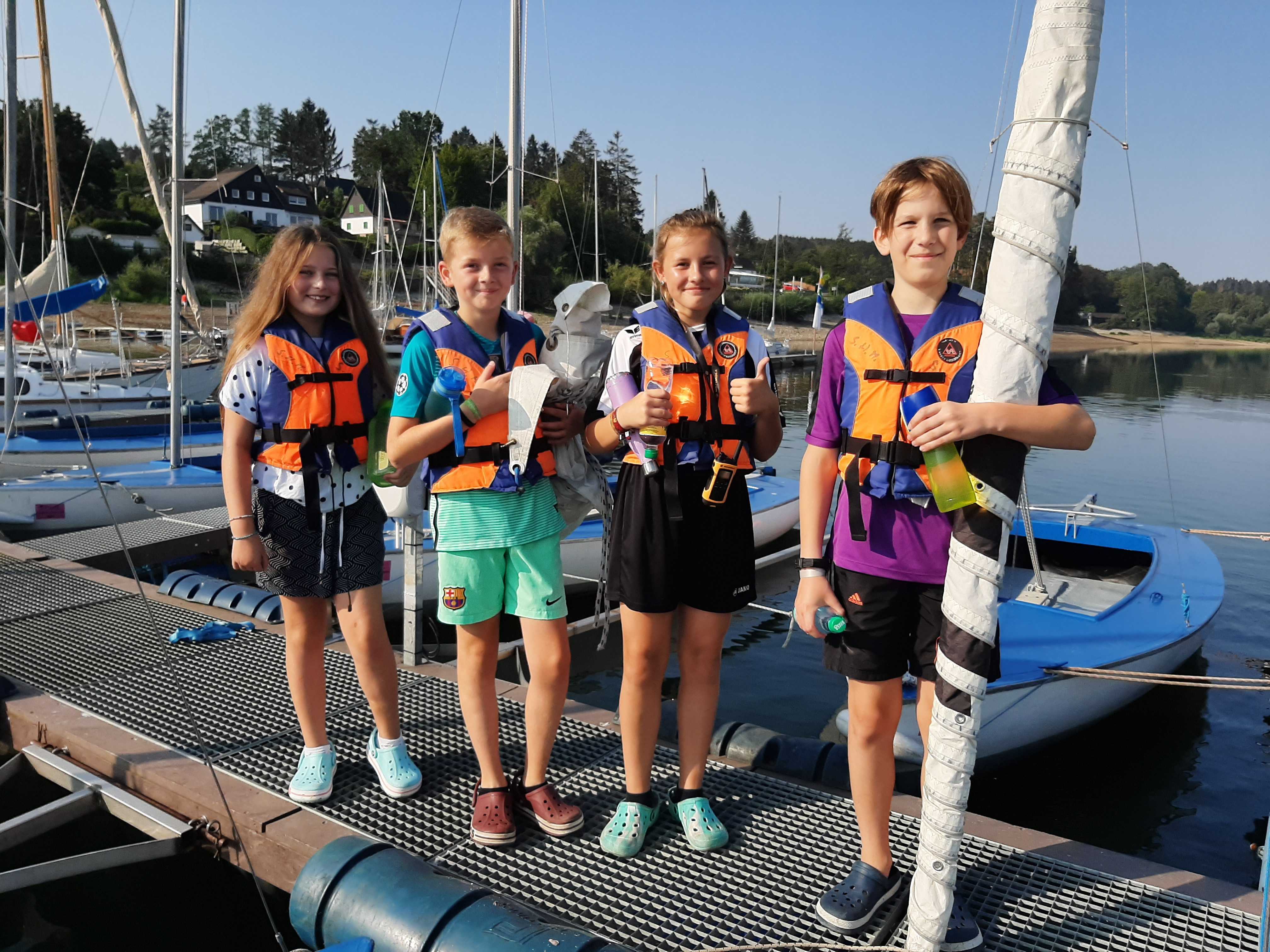 Last week we all travelled to Möhnesee by bus. On Monday morning we started at 8.30 a.m. in Ramsloh. On the bus we sang a song for the busdriver. He was very nice and friendly. On the way we stopped at Serways and some pupils bought drinks or food there, but it was a little bit expensive. But on the bus we had a lot of fun.

We arrived at the youth hostel at lunchtime, put our luggage into our rooms, made our beds and then had lunch. In the afternoon we walked into the forest and climbed on a tower. From there we had a nice view. In the evening we made posters for our doors with our names on it.

On Tuesday our class went sailing on the lake. But first we got lost because we went to the wrong side of the lake. On the little boats we wore life jackets. In the afternoon we also went swimming in the lake and somebody found an old mobile phone. We saw many little fish in the water.

On the third day we went to the LIZ by bus and watched a film about the Möhnesee dam. There were many interesting things to see at the LIZ and we did a rally with a partner. Later we walked to the dam and had lunch there.

At 1 o’clock p.m. we took the ship and then walked back to the youth hostel on foot. On the way we sang many songs and came home at 3.30 p.m. In the evening we had a nice barbecue, but there were too many wasps, so we ate inside the cafeteria.

On Thursday we walked into the forest again and there we saw a cute little squirrel. A woman from the LIZ showed us a lot of interesting things in the forest and we played a game with a bell.

In the afternoon we went to the other side of the lake and built a raft in small groups. Mrs Harms took many photos. On the raft we rowed to the bridge and then we swam in

the lake with our life jackets. That was a lot of fun. A girl fell off the raft when she changed the side with another girl. Everybody laughed.

On Friday we cleaned our rooms, had breakfast and carried our bags to the bus. Then we drove back home at 9.30 a.m. We arrived in Ramsloh at 1 o’clock p.m. and our parents were happy to see us again.

Our time at Möhnesee was very nice because we did many interesting activities. We always knew about them because Mrs Harms gave us a plan. The sun shone every day and we were very happy. But one of the pupils from another class broke his arm, went to a hospital and had an operation. Poor boy!

The youth hostel was in the forest on a hill and had a big garden. They sold sweets, drinks, little presents and postcards. Some pupils wrote postcards for their parents and friends. The food in the cafeteria was very nice, but we also bought some sweets at the reception or drinks from a machine. In the building we all wore crocs. The playground of the youth hostel was a little bit too small for us, but the garden was very nice. We played there in the evenings.

Our rooms were cool and they all had a bathroom with a shower. The beds were very comfortable. In the evenings we talked to our roommates or played games with them. We laughed about jokes, ate sweets and felt happy, but some also missed their families or pets. We only got our mobile phones for an hour every evening but that was OK. Mrs Harms and Mrs Stallo visited our rooms and they gave us sweets for a nice clean room.

One evening somebody organised a birthday party for a girl. She had a cake with candles and everybody sang a birthday song for her. She even got little presents.